Birmingham is buzzing, and there’s plenty to keep you busy on a stay here, whether it’s the brilliant shopping, the famous Balti Triangle, or discovering the local area’s arts scene at the Custard Factory. The city’s industrial heritage has provided some fascinating architecture that now makes for an interesting backdrop for bars and accommodation. There’s also greenery to be discovered, and a canal boat trip can be a fantastic way to get to know the city better. Birmingham offers some great boutique hotel options too. Here are boutiquehotels.co.uk’s favourites.

Since opening in 2016, the High Field Town House, pictured top and below, has quickly established itself as one of Birmingham’s best boutique hotels.  The delectable hotel has been created in a handsome Victorian villa property in the leafy Edgbaston area of the city. Each of the twelve air-conditioned bedrooms has been lovingly and individually designed, with a generous helping of stylish wallpapers, handpicked antiques and comfy beds throughout. All of the tasteful rooms have a 32 or 40 inch television and several have freestanding roll top baths. The boutique hotel is run alongside the popular High Field gastropub next door which is where food served. 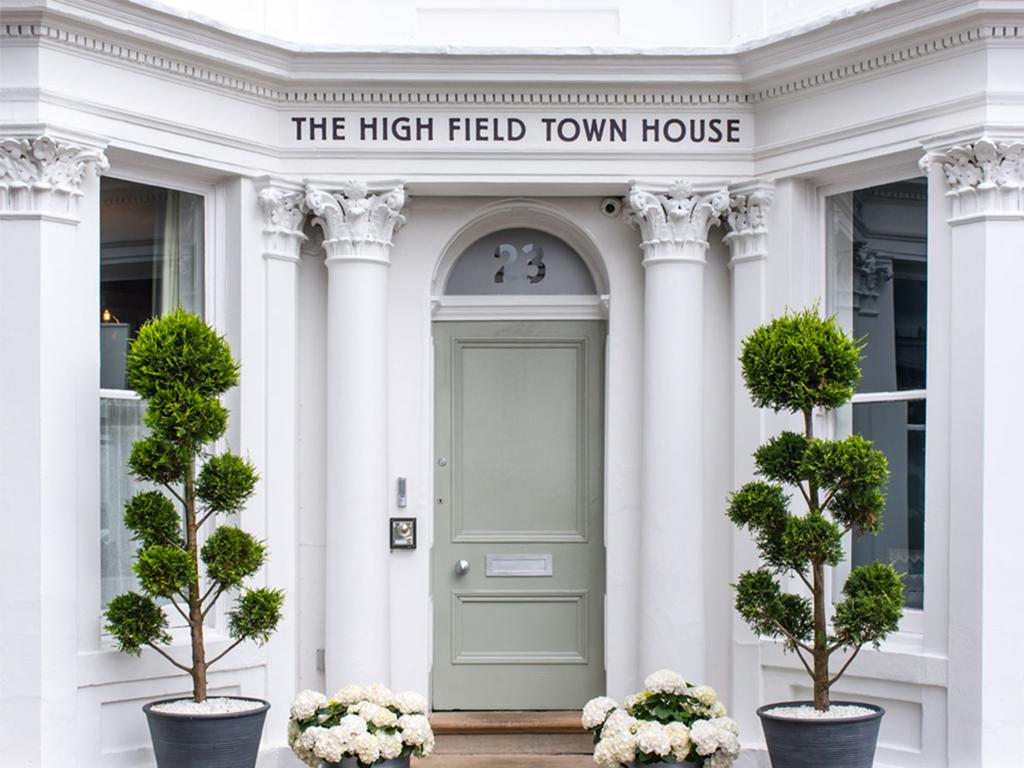 The High Field Town House opened in 2016 in an elegant listed Victorian house.

Each of the 12 rooms has been individually designed.

Still in Edgbaston, the Edgbaston Boutique Hotel (****) is a stunning, intimate six bedroom boutique hotel. This elegant and stylish four-star hotel, which boasts a classy cocktail bar, mixes its original Victorian architectural features with luxurious, contemporary designs.  The rooms are all en suite, with free standing baths, and have king size leather beds with sensor foam pillows and mattresses. The interiors at the Edgbaston have been individually furnished to create a strikingly sophisticated place to stay. 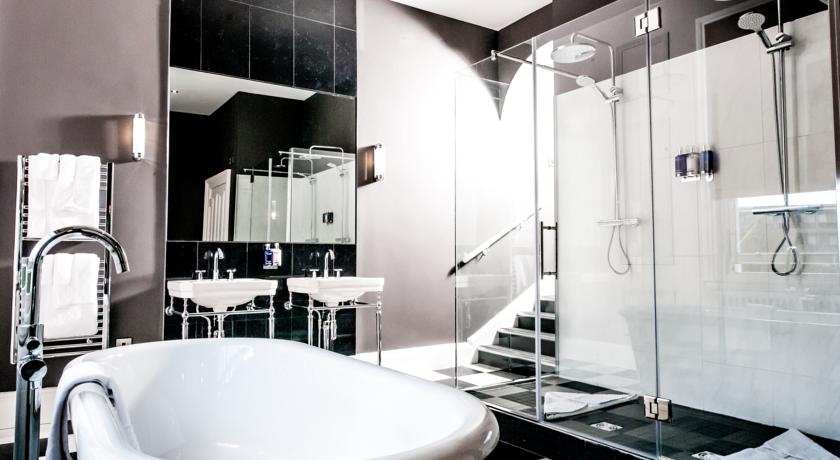 The Mailbox is a mixed use development in a former Royal Mail building with top stores, restaurants and Birmingham’s Malmaison hotel (****).  The four star hotel takes its usual approach and has created a stylish, contemporary place to stay in the heart of Birmingham.  This is one of the larger Malmaisons and it has a wide selection of rooms and suites.  The Nirvana suite has been designed to meet the expectations of your inner rock star – we’re thinking Noddy Holder – and includes a mirrored jacuzzi and giant bed.

Malmaison’s stablemate Hotel du Vin (****) is set within what was an eye hospital in Victorian times. The result is stunning, with a grand central courtyard and an imposing staircase. All the 66 bedrooms are designed to work with the original architecture so no two rooms are the same, no matter if you are booking into a standard room or one of their suites. As well as special touches, such as super king size beds and roll top baths in the suites; the hotel offers all the features you would expect from this boutique chain, including a spa and a gym. 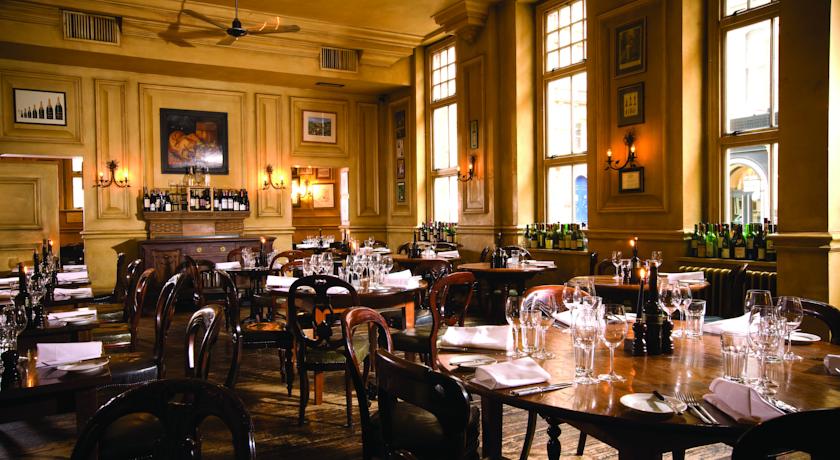 In contrast, Hotel Indigo (****) is situated within one of the city’s most distinctive new buildings. Occupying the 23rd and the 24th floor of The Cube, state-of-the-art technology meets contemporary comfort in this hotel. Each room has a Cloud 9 bed, a rainfall shower and its own media hub. Facilities at Hotel Indigo Birmingham include a health club and a hair salon, but the highlight has to be the Marco Pierre White steak restaurant, designed with windows that allow breathtaking 360-degree views over the city. 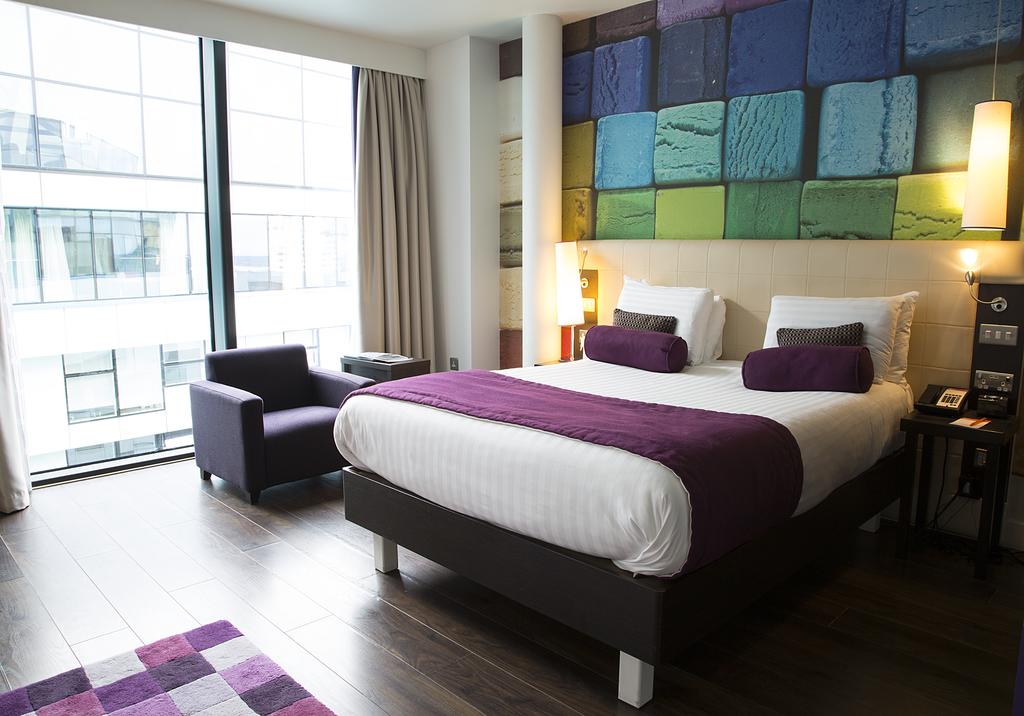 The wallpaper in this room at Hotel Indigo gives a knowing look to the hotel’s location in The Cube.

The Bloc Hotel (***) may have a lower star rating than our usual hotels but offers an interesting concept (soon to be expanded to a second branch at Gatwick airport) that may suit solo travellers. It’s a capsule-style hotel, aiming to offer luxury accommodation for a very reasonable price. Although the rooms are small, they are high spec, with touches such as a king size bed with Egyptian cotton linen, a monsoon drench shower and ambient lighting. The hotel is conveniently located too, within the city’s recently revitalized Jewellery Quarter.

For a great alternative outside of the city centre, Hogarths in Solihull (****) is set in 26 acres of beautiful grounds. The rooms don’t disappoint either, furnished with luxurious features such as seven-foot poster bed or starlight ceilings. The popular bar and brassiere, meanwhile, offers everything from breakfast through to afternoon tea through to an evening meal. Situated close to both the airport and the NEC, Hogarth’s offers a convenient location as well as a relaxing base.

An interesting alternative, with equally impressive views, are the Staying Cool Serviced Apartments (*****), based in Birmingham’s tallest building, The Rotunda. This Grade II listed building dates to the 1960s, and retro styling is part of the charm of its décor. Technology, however, is definitely twenty-first century, and the Poggenpohl kitchens are equipped with orange juicers and espresso machines to make it feel like a home from home. Each room, whether a Mini, a Clubman, Maxi or Roadster – named after vehicles made at the nearby Longbridge – has floor to ceiling glass windows and, possibly more importantly, also come equipped with blackout blinds to ensure a good night’s sleep. 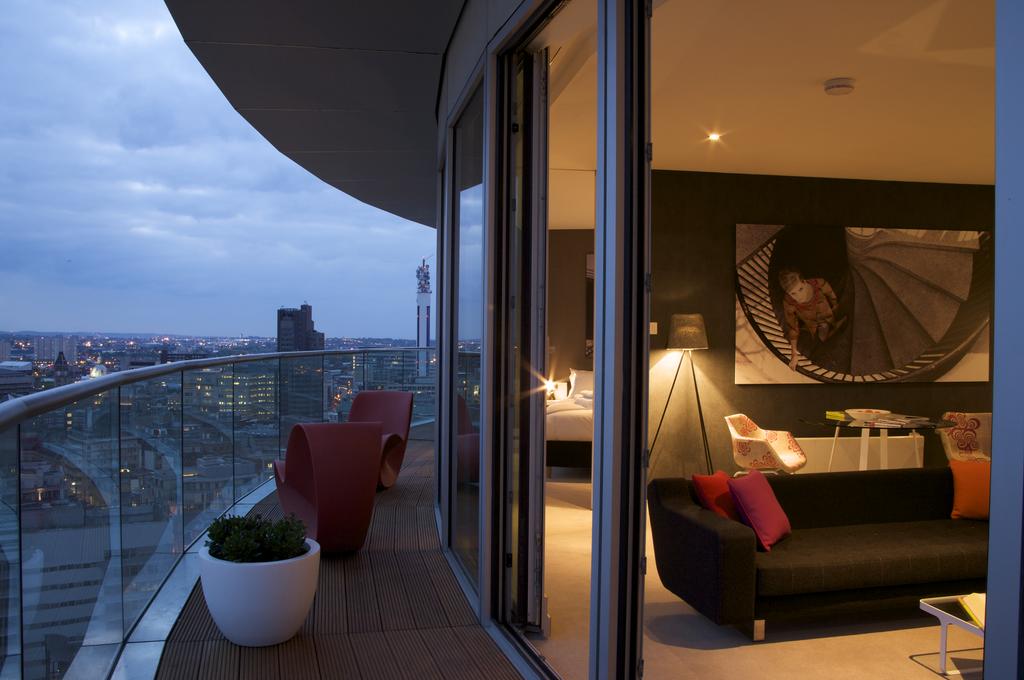 Map of Boutique Hotels in Birmingham

Things To Do in Birmingham

Take in the arts
Birmingham Museum & Art Gallery in the heart of Birmingham city centre has over 40 galleries to explore including the largest public Pre-Raphaelite collection in the world. The museum itself opened in 1885 and is in a gorgeous Grade II* listed building designed by architect Yeoville Thomason.

Enjoy a concert
Birmingham’s Grade I listed Town Hall is one of the oldest concert halls anywhere in the world. The historic building is where Charles Dickens gave his first public reading of A Christmas Carol. It hosts an eclectic array of musical and entertainment performances.

Visit Cadbury World
Discover the world of chocolate making at the Cadbury World visitor attraction which is located on the original Cadbury factory site in Bournville.

See what’s on at the NEC
The National Exhibition Centre (NEC) in Birmingham plays host to a wide range range of trade and consumer exhibitions and events throughout the year.

Discover Sea Life
Explore over 60 marine displays at the National SEA LIFE centre in Birmingham.  See a stunning Giant Pacific Octopus up close and they currently have a rare baby Gentoo penguin! The Sea Life centre is in Brindleyplace B1.

A NEW twelve bedroom boutique hotel has opened in the Edgbaston area of Birmingham. The High Field Town House hotel from... END_OF_DOCUMENT_TOKEN_TO_BE_REPLACED