At boutiquehotels.co.uk, we’ve looked at boutique hotels with great sea views and hotels that are just perfect for foodies, but if they sound a little – dare we say it – tame, here is a selection of hotels that are not about indulging your quieter side. It’s safe to say, whatever your passion or pursuit, there’s a British hotel that will cater for it. From ghosts to gorillas and ménage à trois to tree houses, here are some of the most decadent, indulgent and downright crazy hotel experiences on offer.

Unleash your crazier side

Let’s start with an experience that they describe as “un-thoroughly British, borderline illegal”. It’s a romantic night away in a gorgeous hotel. So far, so vanilla. But the twist is that it’s offered for three of you. Yes, Wish.co.uk offers a romantic break for three, complete with champagne, chocolate and breakfast in bed. While the hotel staff will be completely discreet, it’s up to you to decide how much you’ll reveal to your friends when asked if you’re doing anything nice on your holidays.

Adventurous types may also appreciate the services offered by Box of Grey at a small selection of suitably decadent boutique hotels, including the Witchery in Edinburgh, Drakes Hotel Brighton, and London’s Gore Hotel and Soho Sanctum. Box of Grey create deluxe velvet-lined cases filled with playful and risqué toys that can be delivered directly to your hotel bedroom, no questions asked. At Soho Sanctum the service on offer goes one step further. Room 404 is the designated BXG Suite, complete with its own ‘toy’ cupboard, fully stocked with sex toys, accessories and restraints.

All sound a bit high pressure? Well then, the Clover Spa & Hotel in Birmingham is the place to let it all hang out. It’s the UK’s only clothes free spa hotel. Its visitors praise the relaxed and friendly service, as well as the comfort of its seven luxury bedrooms. Additional attractions include the spa break offers and quiz nights (with the bonus of cheats having nowhere to hide their mobile phones!).

Accommodation that’s far from the norm

Moving outside of the bedroom, and the UK’s varied architecture makes for some great boutique hotel experiences. Malmaison are already known for their imaginative interiors, but none will perhaps let your imagination run quite as wild as their Oxford hotel, which is housed in a former prison. Spend the night at your own leisure – rather than Her Majesty’s! The ‘Cell Rooms’, however, are a tad better equipped these days with all the touches you’d expect of a Malmaison hotel.

Fancy a journey back in time? You’ll figuratively and literally feel like you’re doing just with a stay at the Old Railway Station Hotel in pretty Petworth, West Sussex. Built in the 19th century, the train station closed its doors to passengers in the 1950s but now you can relive the days of elegant train travel at the ultra-charming hotel which has been created using the station building itself with the help of four Pullman carriages (pictured top and below) on the old railway line.

Stay in a Pullman carriage at Petworth’s Old Station Hotel.

At Brooks Guesthouse in Bristol, guests can stay up on the hotel’s roof in one of four ‘Rooftop rockets’, aka deluxe retro-style airstreams. Their homey touches include flat screen TVs, WiFi and Roberts Radios. Although you might feel like you’re on an adventure, you’re actually far from the wild, with access to the hotel facilities and Bristol city right on your doorstep. 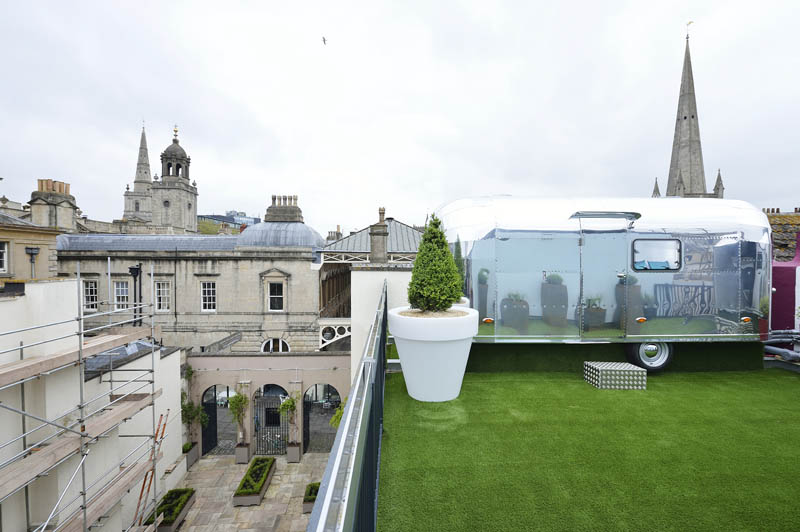 You’ll also be far above the maddening crowds if you choose a stay in one of Chewton Glen treehouses. These twelve tree houses go far anything you might have experienced as a child. Huge windows and balconies mean you can make the most of the views while the secluded woodland setting provides privacy. Some tree houses even have their own private outdoor hot tubs. Although guests are provided with their own breakfast hamper each morning, their situation in the grounds of Chewton Glen Hotel means you can enjoy their five star facilities, including their spa, golf and tennis.

But to really get away from real life, head to Spitbank Fort. It’s a private island hotel you have to reach on speedboat. If that hasn’t already fuelled your latent James Bond fantasies, the hotel also boasts fine food, a Laurent-Perrier champagne bar, heated pool and observation desk. Activities on offer include a lesson in sabrage – for the uninitiated, that’s how to take the cork out of a champagne bottle with a sabre.

Chocoholics should make sure they sample Bournemouth’s Chocolate Boutique Hotel, which has the honour of being the world’s first chocolate-themed hotel. Chocolate links everything in this hotel, from the brown and caramel décor of the rooms to the daily helpings on offer to guest. Chocolate fountains are recommended for romantic breaks, while ‘chocolate sleepovers’ comprise of a range of sweet experiences, from painting a choccy portrait to chocolate cocktails. 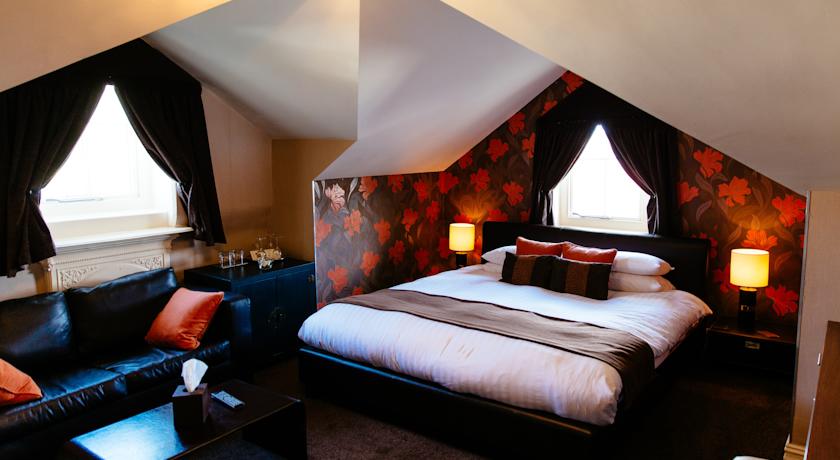 Sweet tooth not satisfied yet? Head to the Cotswolds and Three Ways House. It’s the home of ‘the pudding club’, an event that celebrates the great British dessert. Appropriately seven of this hotel’s 48 bedrooms are pudding themed, from the Chocolate Suite to the Spotted Dick and Custard Room. Their ‘Chocolate Indulgence Break’ includes a chocolate-inspired dinner, cooking demonstration and even a chocolate treasure hunt.

The owners of Llamas Pyjamas in Cumbria spotted a gap in the British boutique hotel market and that gap was … llamas! These gentle creatures take a starring role in this Peruvian-inspired hotel. Guests are encouraged to go on llama treks, or the large windows of the hotel allow you to watch the animals roam the grounds from the privacy of your own room. The three boutique bedrooms are all South American themed and their delights include wet rooms and fresh flowers … in fact, all the creature comforts. 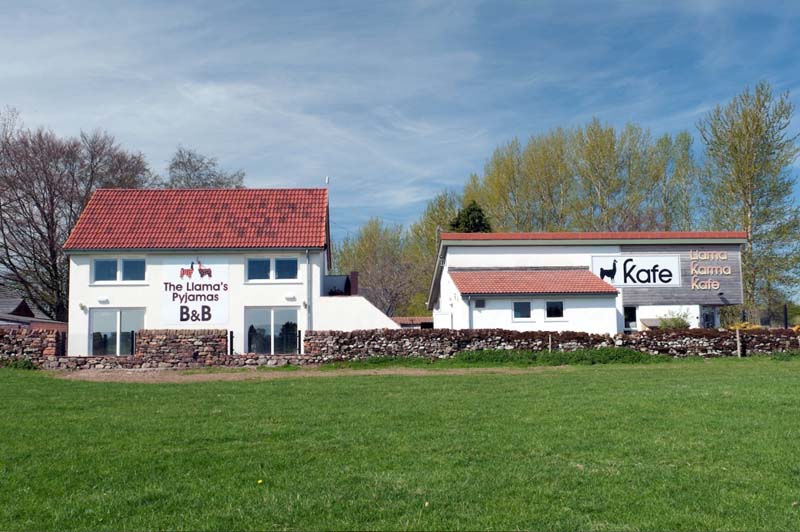 Alternatively, you can enjoy the safari experience in the wilds of Kent, thanks to Livingstone Safari Lodge. A trip includes safari rides through Port Lympne Nature Reserve, where you could spot exotic beasts including tigers and cheetahs, gorillas, giraffes and zebras. Home camp is compromised of luxury tents, while dinner includes authentic African food for dinner, cooked over a fire pit. If even ‘luxury tents’ sounds a little too much like roughing it for you, the Port Lympne Hotel – once a private home that entertained the likes of Lawrence of Arabia and Prince Edward and Mrs Simpson – offers entrance to both Howletts and Port Lympne Wild Animals parks and all mod cons on tap.

Learn Something A Bit Different

The Crazy Bear in Stadhampton probably warrants a place on this list by virtue of its décor alone. But as well as its opulent interiors, themed restaurants and the double decker bus that doubles as its reception, it offers a range of outdoor pursuits that go far beyond clay shooting (although it offers that too). Axe throwing anyone? Or the gentler minded could go quackers and try their hand at duck herding.

Edinburgh’s Bonham Hotel meanwhile, offers a range of events encompassing everything from wine tasting to cupcake classes. But for a real thriller of a weekend, check in for one of their Chiller Breaks, a unique way to explore the UK’s most haunted city. Including a tour of the darkest and spookiest spots of Auld Reekie, you’ll be glad when you can escape back to the comfort of your luxury 4 star bedroom.

Car enthusiasts, meanwhile, will give the green light to the Brooklands Hotel. This Art Deco-inspired building in Weybridge, Surrey, is on the site of the historic Brooklands racetrack – which saw the world’s first 100 miles per hour drive – indeed, it runs through the foyer. The hotel looks out onto the Mercedes-Benz World Track where you can try out driving the Mercedes-Benz 6.2 litre V8 AMG yourself. Not such a petrol head? Handily, the hotel caters for alternative interests with their Car & Spa weekend: while one of you is behind the wheel, the other can relax and take full advantage of the Spa facilities. 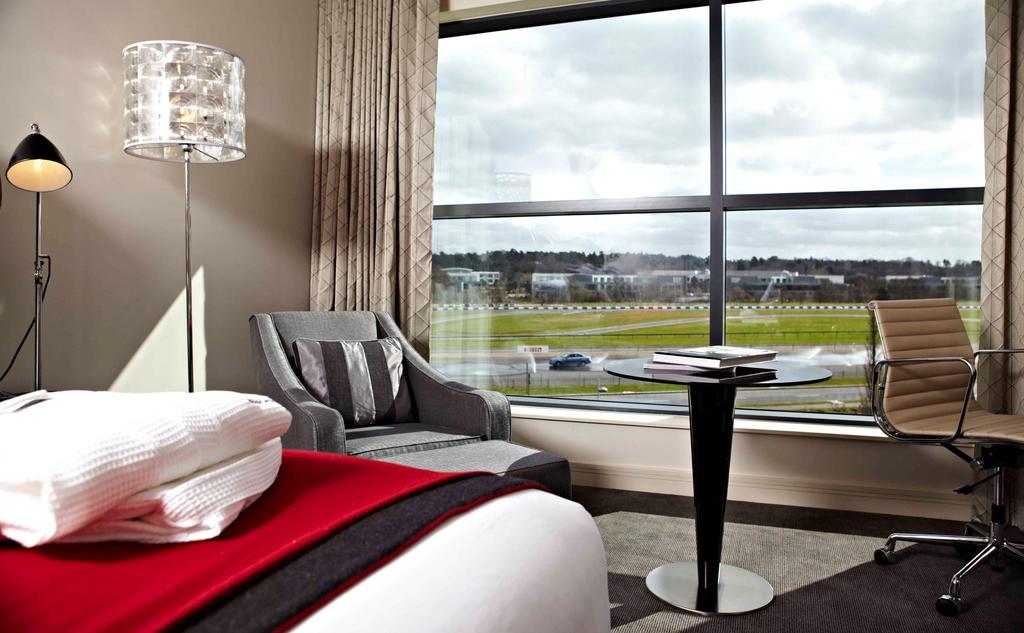 Art Deco-inspired Brooklands Hotel at the former racetrack near Weybridge

Forget soulless crash pads, Hen parties and stag dos get taken up a notch at the Signature Hotel in Liverpool with themed suites including ‘The Hangover floor’, which sleeps up to 11, and has its own double whirlpool bath. There’s a huge range of packages to pick from, including the dance class that’s part of a ‘High Heels and Hairspray’ experience, or the spa treatment and afternoon tea that comes as part of a ‘Pretty Woman’ offer.

Liverpool is – naturally – also home to the Hard Days Night Hotel, which, if the name doesn’t give it away, is a hotel dedicated to The Beatles. With Fab Four artwork throughout the hotel and the Lennon and McCartney suites (the Lennon suite including a white Baby Grand piano), it’s surely a must for any music fans about to embark on their own magical mystery tours of the city. 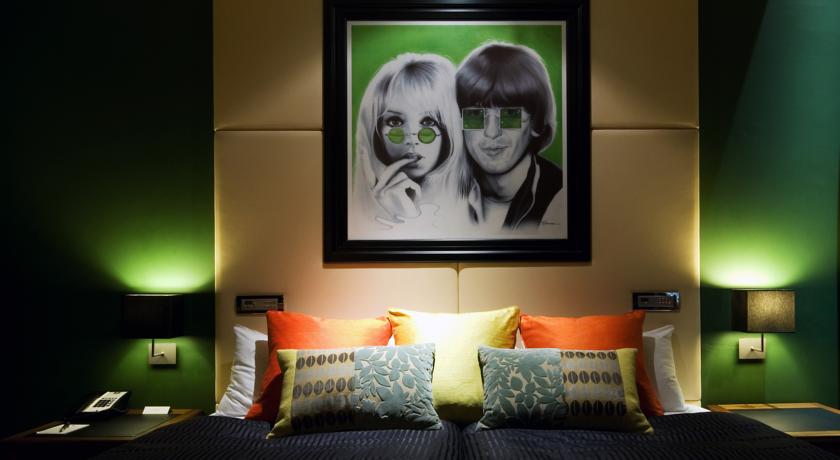 It’s London’s Ace Hotel, however, that could perhaps lay claim to being the UK’s most rock n roll hotel. Not only does it have its own radio station, many of its rooms also come equipped with record players and guitars. Add to that the changing rostra of DJs in its foyer, and its very own gig space, and you’re living like a rock star, before you even hit the bar.