Relaxing somewhere stylish, relaxed and comfortable, with a glass of wine in hand is one of the pleasures of the boutique hotel experience. Some hotels, however, go a step beyond, making a celebration of wine a central part of their ethos – and making them worthy sites of pilgrimages for wine lovers. We’ve picked out a selection of our favourites and, like any great wine list, we hope it encompasses a great vintage, some new discoveries and some old favourites. Cheers!

In any feature that pairs hotels with wine, Hotel du Vin is an obvious place to start. Hugely influential collection of hotels – now 17 around the country – based on a  shared love of wine, something they describe as “the very lifeblood of our bistro, bar and hotel”. Founded by Gerard Basset and Robin Hutson, who had both previously worked at Chewton Glen (see below), the very first branch opened in Winchester  in 1994, and it helped set the template for what was to follow. The Winchester branch (pictured below) is housed in an elegant Georgian building dating to 1715 and still epitomises the same attention to detail and emphasis on quality, without stuffiness or fussiness, that made the hotel such a breath of fresh air when it opened. Their extensive cellar encompasses wines from around the world, with French wines featuring heavily, served by people who, in their own words, are “passionate, but not pretentious”. The 24 bedrooms are all individually decorated, with antique details sitting alongside modern comforts, from handsprung mattresses to fine Egyptian cotton to the fluffy roles and towels, perfect for cosying up in after a blast in one of the monsoon power showers or a soak in the roll top baths. 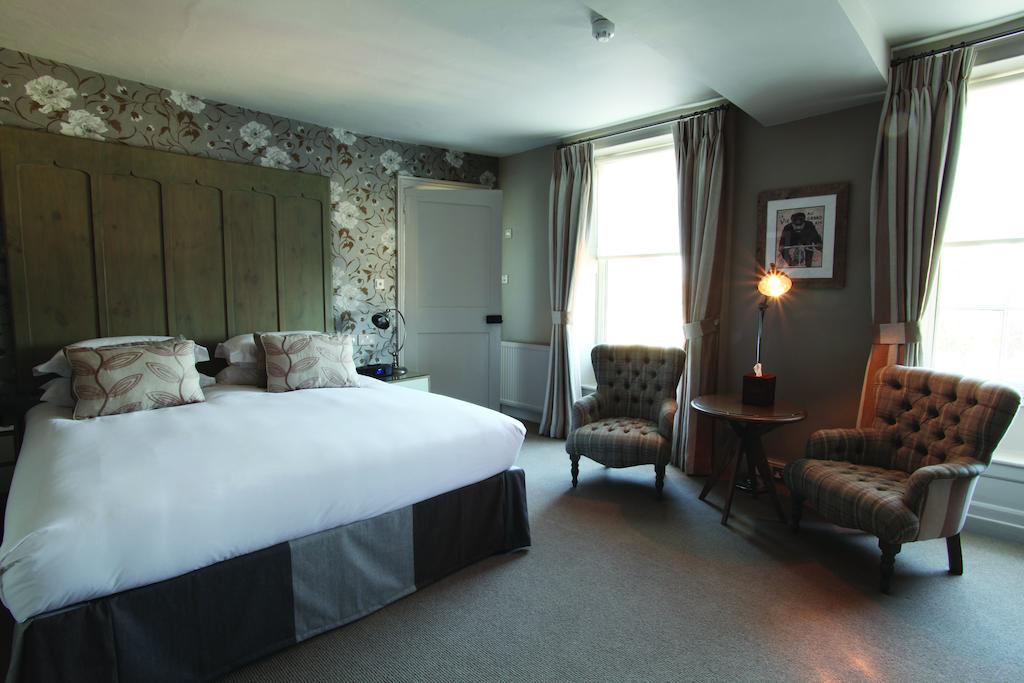 After Hotel du Vin, Gerard Basset went on to open Hotel TerraVina with his wife Nina in Hampshire. It a product of both their expertise: Basset’s impressive range of titles includes Best Sommelier in the World, as well as Master Sommelier, Master of Wine and Wine MBA awards; Nina was the AA’s youngest ever hotel inspector. Neil Wilson, the hotel’s Business Development Director, explains that because Gerard is so highly regarded in the wine world, this led them to naturally play on the wine theme. Guests can view the open cellar or enjoy a tour of the vaulted basement cellars. Both are guaranteed to turn up interesting and unusual discoveries. There’s also something for all budgets to enjoy. According to Neil, “For people with modest wine knowledge, it’s an opportunity to discover some unusual wines and be made relaxed and at ease by the friendly Sommelier team. For people with a great wine knowledge, it’s the opportunity to converse with one of the Sommeliers and enjoy wine served in their optimum condition.” If the concept for Hotel du Vin was French bistro, Hotel TerraVina takes its cue from a Californian wine country restaurant, creating a relaxing, sociable atmosphere to accompany the seasonal menus which use local, often organic, ingredients and wine pairings.

Despite the Californian touches, Hotel TerraVina is definitely rooted in its New Forest base, with locally-crafted touches and specially commissioned photographs of the area in each of the 11 bedrooms. While each of the room has their own unique features, you can expect boutique necessities such as Nespresso machines and flat screen TVs, along with high quality beds and bedding. The bathrooms, meanwhile, see deluge rain showers, fluffy towels and organic, locally picked lavender toiletries. Rubber ducks provide a quirky addition.

Also close to the New Forest, Chewton Glen still maintains its impressive reputation for wine. With 1966 individual wines, it’s one of the largest wine lists in England in terms of producers, regions and diversity. As they explain, “Our wish is to showcase up-and-coming styles that we deem quirky and individual, whilst tipping our hat to the most reputable wine regions”. The wine is just one of many treats in this 5-star country house hotel. The award winning dining room offers fine dining with a seasonal menu, using local produce. There’s a spa, a gym, an outdoor pool and 130 acres of land to explore, as well as a golf course and four tennis courts to keep you active. Its elegant rooms often have balconies and garden views, but for a quirkier stay, consider booking one of the 12 tree houses.

To get even closer to your grapes, why not consider a stay in an actual vineyard? One of our favourites is Three Choirs vineyard, where you can stay amongst the 75 acres of Gloucestershire hillside that produce around 300,000 bottles a year. They are more a “restaurant with rooms” than a boutique hotel, but it’s still a magical experience for wine lovers. There are eight ‘Vineyard View’ bedrooms, complete with king-sized beds and comfy leather armchairs. The real selling point, however, is that each has their own south facing patio, with views over the vines in the valley. The three glass Lodges, meanwhile, are set among the vines in the valley’s base. With their large verandas and clawfoot baths, they’re a great invitation to de-stress and unwind. Get closer to the vineyard with their special trail, where you might spot owls and rabbits, or go straight into the complimentary wine tasting of five different wines, supplied with tasting notes and nibbles. A vineyard tour takes place most mornings and you can also savour the wines at the restaurant, as an accompaniment to some great British cooking.

Head to the heart of West Wales to enjoy another vineyard stay at Jabajak. The original farmhouse stone buildings now house luxury accommodation and a 5-star award winning fine dining set among seven acres of gardens and vines. The guest lounge is a lovely place to retreat to in an evening, with log-burning stove and handmade Moroccan rugs. A baby grand piano, DVDs and board games can provide entertainment. While the ten bedrooms share a love of carved wood furniture, luxury bedding and views over beautiful grounds, each is different, ranging from the kingsize bed and the slipper bath of the romantic Grainstore Suite to the Honeymoon Suite’s Queen-sized bed and settle, with marble-topped dresser and a sumptuous sofa, all housed beneath exposed ceiling timbers. An private decking area overlooks the grounds. 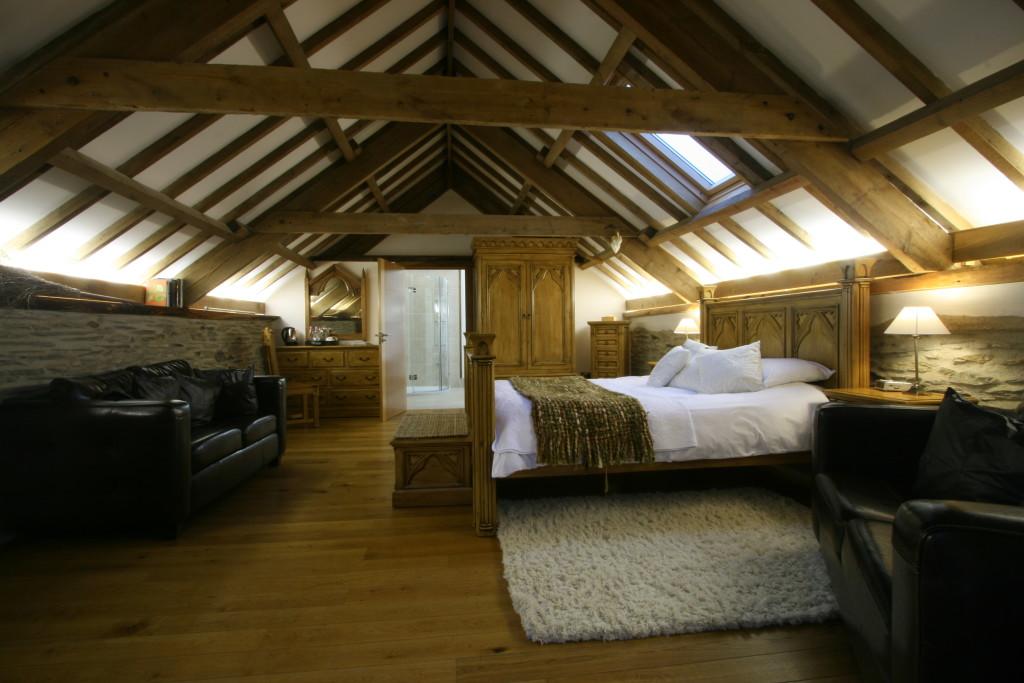 We’ve featured Star Castle before, as a hidden hideaway. It shares St Mary’s with Britain’s most southerly vineyard and both are under the same capable hands of Robert Francis. Under the guidance of Willi Opitz, one of the world’s best regarded wine producers, Robert planted 7,000 Pinot Noir, Chardonnay and Pinot Gris vines across seven acres on the island. Perhaps it’s no surprise that you can sample the results at the hotel, in the two award-winning restaurants. As well as taking advantage of the facilities at the hotel, which include a swimming pool, tennis court and golf, guests staying in this 16th-century castle will want to pay a visit to the vineyard itself, described as “one of the most beautiful vineyard sites in the world”. They offer tastings at the the vineyard, but it’s also worth booking in the for the Lobster Lunch hosted there: fresh lobster, caught by Robert, served with chilled HolyVale wine.

Another luxury wine experience can be enjoyed at the appropriately named The Vineyard at Stockcross, near Newbury in Berkshire. Originally a 19th-century hunting lodge, it’s now an award-winning 5-star Hotel and Spa and a self-styled “temple to Californian wine”. They have more than 800 Californian wines among the 30,000 strong wine cellar, including a complete selection of those produced by owner Sir Peter Michael’s Sonoma winery. However, it’s not just California. The wine list has been praised its imaginative buying from all over the world, encompassing wines from England, Croatia, Lebanon, Slovenia, and Hungary. All sorts of wine-based entertainment is on offer, from private tastings to ‘iconic wine nights’, a perfect opportunity to try a glass of something new. The Vineyard spa offers grape-themed treatments, while the pool, sauna and steam room offers plenty of opportunity to unwind ahead of dinner. The wine theme is also on display in the 32 suites and 17 bedrooms – all named after wines. The luxury continues there too, with REN product and fluffy bathrobes, and the likes of four-poster beds and Italian marble finish bathrooms. Dinner is another real treat, with chef Daniel Galmiche serving up modern takes on classic cuisine. Guests can even arrange their own “Judgement of Paris” food and wine experience: a seven-course tasting menu, with each course matched with both Californian and French wines – and two blind tastings to compare the two. 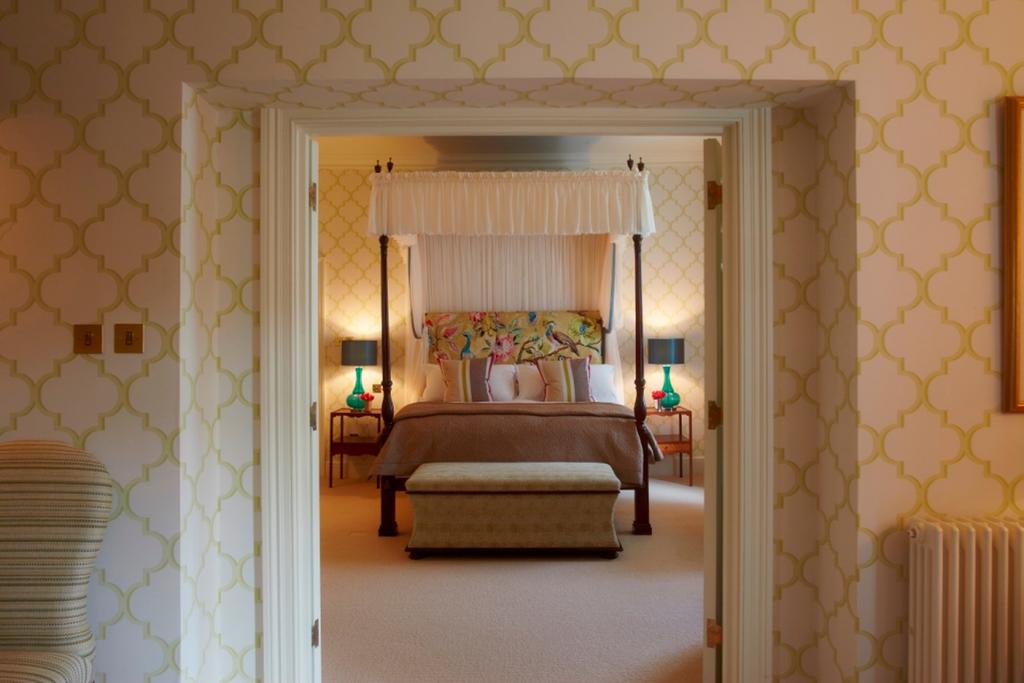 The Vineyard at Stockcross