Kent is known – thanks, apparently to Henry VIII – as the “Garden of England” due to its plentiful orchards, picturesque rolling fields, iconic oast-houses, beautiful period properties and unspoilt views in its pretty towns and villages. BoutiqueHotels.co.uk went looking for quirky, luxurious & unusual hotels and places to stay in Kent.

Guide to the top Kent Boutique Hotels and B&Bs

Canterbury is the only city in Kent and makes for a great place to visit thanks to its eye catching architecture, fascinating history, great selection of shops and restaurants and, of course, the world famous cathedral. Canterbury is also home to brilliant places to stay.

ABode is a small chain of boutique hotels – now totalling six – and their sole establishment in the south east, outside of London, is the ABode Canterbury. The 72-room hotel is set in a period property, sympathetically refurbished to house a modern hotel, just a few minutes walk from world-famous Canterbury Cathedral. The history of this site as a hotel and inn can be be tracked back hundreds of years but the proud history is now combined with contemporary style and air conditioning throughout. In keeping with the other ABode hotels, exquisite dining is available in the restaurant from Michael Caines MBE.
Abode Canterbury – High Street, Canterbury 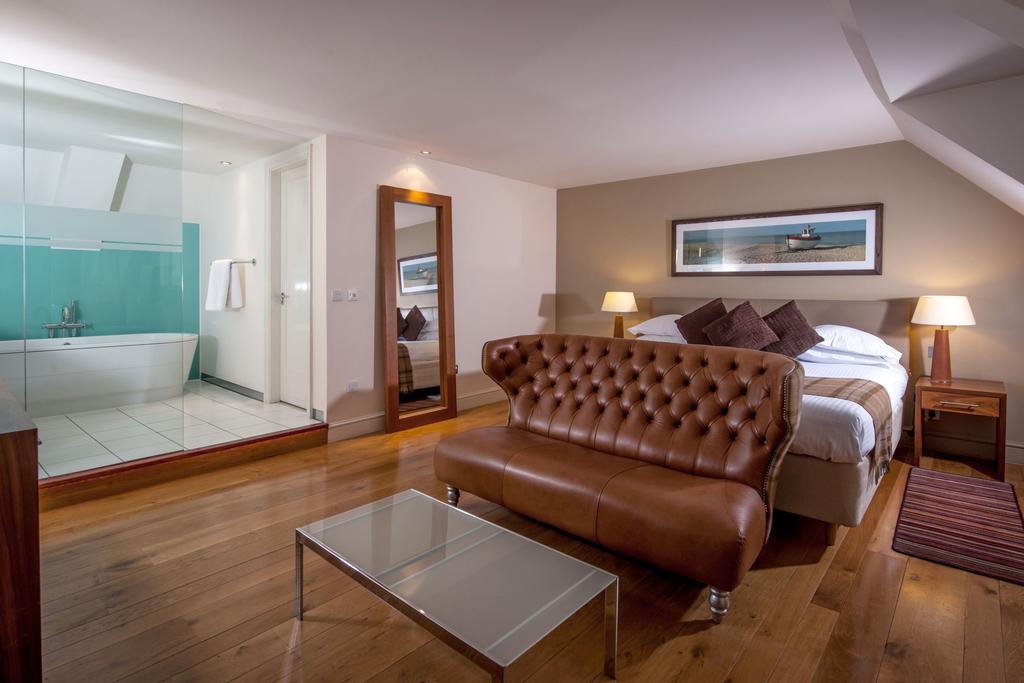 Canterbury’s most famous landmark has to be the cathedral – seat of the head of the Church of England and the scene of the infamous slaying of Thomas Becket in 1170. You can stay in the grounds of the cathedral itself with the four star Canterbury Cathedral Lodge (****). The 35 contemporary bedrooms are bright and airy in this stylish lodge, with many of them overlooking the cathedral which was consecrated almost a thousand years ago. A tasty full English breakfast is served in the Cathedral refectory.
Canterbury Cathedral Lodge – The Precincts, Canterbury, Kent, CT1 2EH 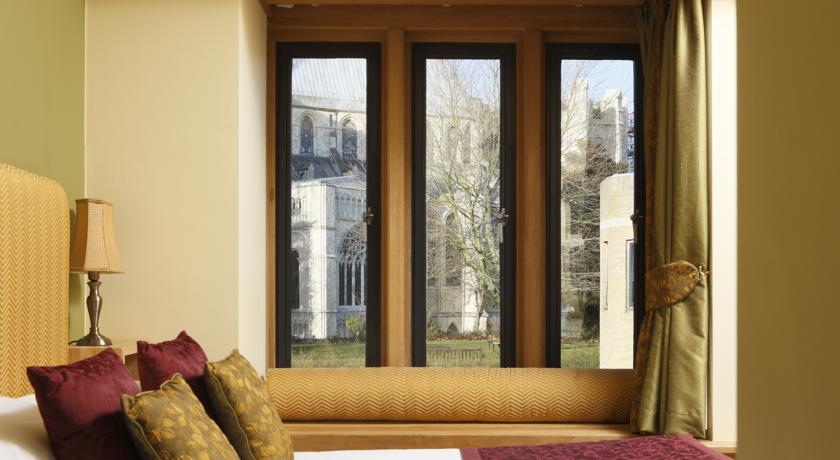 View of the cathedral from one of the stylish bedrooms at Canterbury Cathedral Lodge.

Canterbury has a boutique B&B that claims to have the city’s largest walled garden. House of Agnes  is a short walk from Canterbury West railway station, the Cathedral and the Marlowe theatre and has nine individually themed rooms, each taking its name and inspiration from a particular city such as the elegant Paris Room pictured at the top of the page. Guests at this stylish B&B, which you might have seen on TV’s ‘Four In A Bed’, can start the day with the Kentish breakfast. The property dates back at least 500 years and was notably referenced by Charles Dickens in David Copperfield.
House of Agnes – 71 St Dunstan’s Street, Canterbury

Whitstable is a small, fashionable town known for its picturesque harbour and tasty seafood. Views of the sea can be enjoyed from the “boutique and British” Crescent Turner Hotel with its elevated position on Wraik Hill. All of the sixteen rooms are stylishly and individually furnished, with gorgeous wallpapers, furniture and fabric-covered headboards deployed to great effect.
Crescent Turner Hotel – Wraik Hill, Whitstable 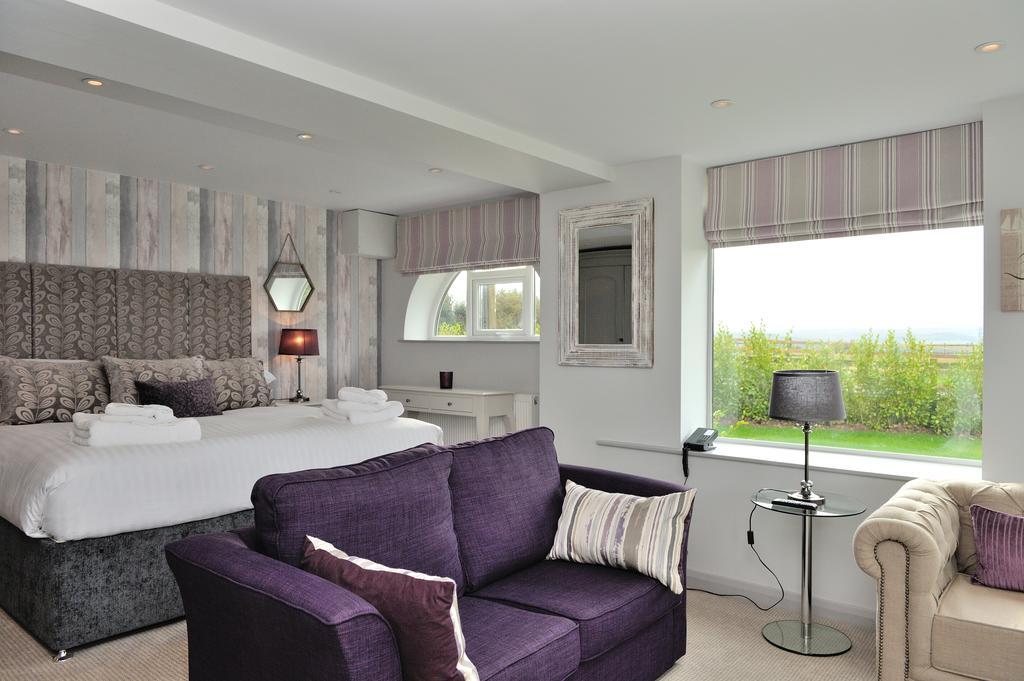 The market town of Faversham is home to what some call one of the best medieval streets in England. It can also lay claim to one of the county’s best boutique hotels with the Faversham Creek Hotel in a handsome Grade-II listed building dating back to 1723.  There are eight en suite guest rooms, all individually named after a local character and all individually furnished. The Queen Matilda Room, with its 7 foot square and 7 foot tall four poster bed, deserves special mention.

Rooms at the Faversham Creek Hotel

Situated next to Faversham Creek, it’s a great location from which to go cycling, do some bird spotting, explore local vineyards or just head off on a walk and the hotel can help plan all those activities and more to get the most out of your visit to Faversham.

Fine dining is provided by the hotel’s Red Sails restaurant which was awarded a four star rating by the AA’s restaurant reviewers just five months after it opened. For those not in the know, the Red Sails name is inspired by Faversham’s historic connection with the iconic sailing barges that were once a common sight plying their trade on waterways like the Thames.  Dozens of those famous barges were built at Standard Quay on Faversham Creek and a visit there is definitely recommended where today, alongside the interesting vessels which can be seen when moored up, there’s an eclectic range of shops selling antiques, collectibles and curios as well as a coffee shop and wine bar.
Faversham Creek Hotel – Conduit Street, Faversham
n.b. Now renamed as the Swan Quay Inn.

About 10 miles from Maidstone town centre, close to the village of Lenham, is the memorably named Who’d A Thought It? Hotel. Boasting a Champagne and oyster bar, this funky boutique hotel has thirteen rooms, each of which is individually designed and named after a Champagne house. The sensual Verve Clicquot suite offers a mirrored ceiling, circular bed and dance pole while the Dom Ruinart suite has a hot tub indoors and one on the private patio as well as a large French baroque bed and comfy leather sofas.
Who’d A Thought It? – Grafty Green, Lenham, Maidstone 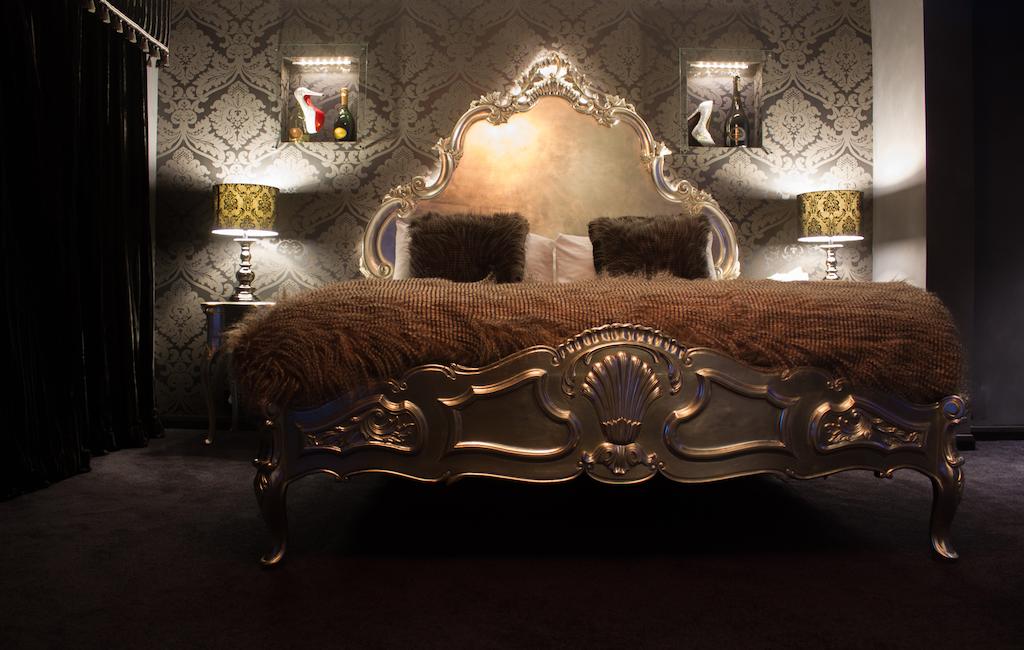 The interiors are as memorable as the name at the Who’d A Thought It? hotel.

Kent is also home to several castles and one of the most beautiful is 13th century Hever Castle (*****), the childhood home of Anne Boleyn who went on to become Henry VIII’s second wife and the Queen of England, before meeting an unfortunate ending at the Tower of London. This stunning location, just outside Edenbridge, has opened a unique luxury bed and breakfast in the castle’s Astor and Anne Boleyn wings. The B&B boasts stunning interiors, incredible and extensive formal gardens, wonderful artwork and tasty food.
Hever Castle, Edenbridge 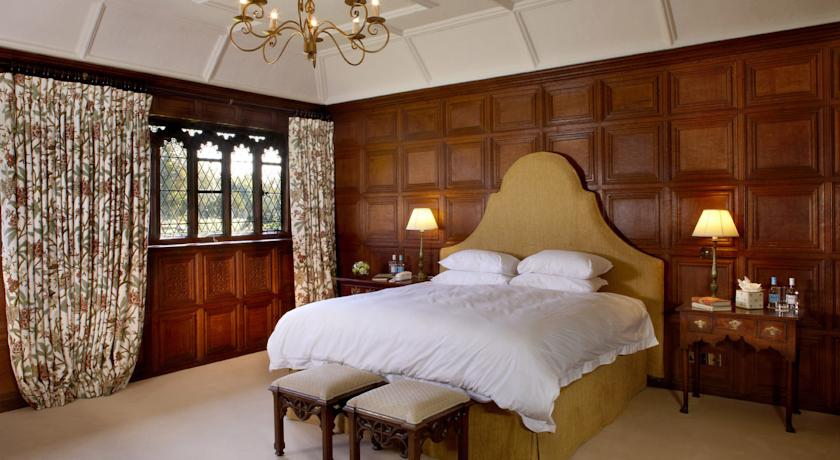 Over in west Kent, close to the East Sussex border, is the charming town of Royal Tunbridge Wells where there’s some of the best shopping in the county. Hotel du Vin Tunbridge Wells is an exceptional 34-guest room hotel created in a Grade-II listed former mansion building. There’s Georgian period detail in abundance and the rooms have the kind of stylish, idiosyncratic furnishing that we’ve come to expect from the well regarded Hotel du Vin boutique hotel chain.
Hotel du Vin – Crescent Road, Tunbridge Wells

If you have visited Folkestone recently, you’ll know it has been transformed;  it’s home to a vibrant creative quarter and the fantastic harbour arm has a stunning array of independent food businesses.

Just a few minutes’ walk from Folkestone beach, Stay2a is a chic and bijou boutique hotel. The property, in Bouverie Road West, was only built relatively recently and provides stylish accommodation in this Kent coastal town. Each of the three light and airy sound proofed ensuite rooms has wood floors and a funky wallpaper which alludes to the room names: Walk in the Park, Love Letters and Burlesque. Breakfast isn’t served at the hotel but there are plenty of food and drink options within easy walking distance.
Stay2a – Bouverie Road West, Folkestone

Margate has enjoyed a renaissance over recent years with the high profile arrival of the Tate Contemporary gallery and the reopening of the popular favourite, Dreamland. This vibrant seaside town also has an excellent boutique place to stay with the Sands hotel and restaurant (****). This twenty guestroom hotel has been furnished throughout to a very high standard with beautifully appointed, air-conditioned rooms that have king size beds with pocket sprung mattresses.  The elegant Superior Seaview rooms enjoy french windows leading to generously sized balcony area with seating over looking the bay.
Sands Hotel & Restaurant – 16 Marine Drive, Margate 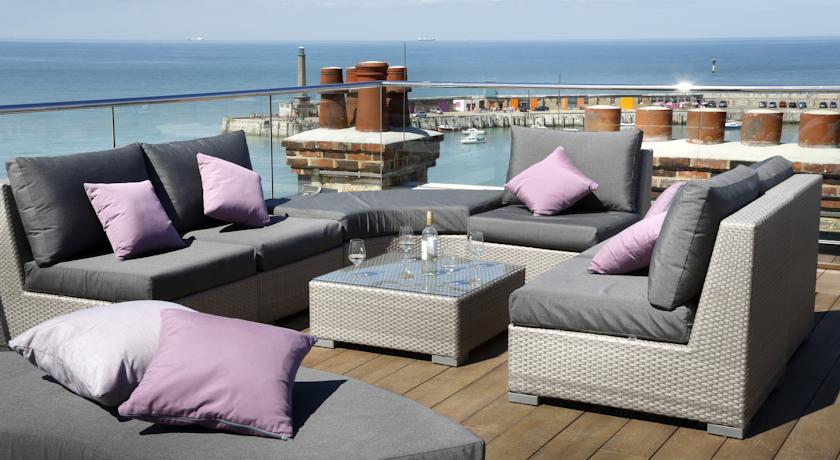 Map of Boutique Hotels in Kent