The charming, ancient cathedral city of Exeter is the county of town of Devon. Brimming with character and history, this charming city has much to offer visitors including luxurious accommodation at these boutique hotels and apartments…

Boutique Hotels in Exeter mentioned in this article

About the turn of the 20th century, work began on the West of England Eye Hospital, designed by Sir Alfred Brummell Thomas. This handsome Exeter property was to take over from a smaller hospital and it served the populous well until the services were moved to a new hospital in 1992. Now, however, this baroque style building is a superb Exeter hotel.

For a while it was known, in a nod to its past, as the Magdalan Chapter, but it simply goes under the name of Hotel Du Vin Exeter (****) now, offering 59 stylish and sophisticated four star rooms.  Choose between standard, double or go for the best with the stunning studio rooms, all furnished to an excellent standard and equipped with REN toiletries and Nespresso machines. 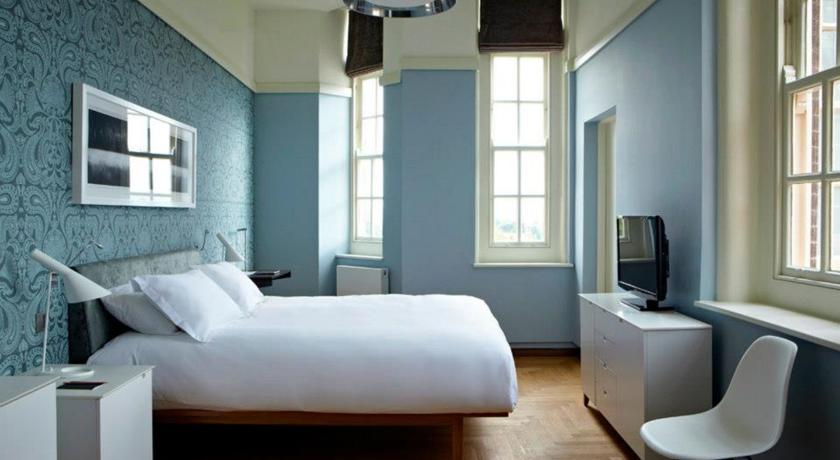 Overlooking Exeter’s 600-year-old cathedral is aBode Exeter (****), in the former Royal Clarence Hotel. The hotel is the oldest in Exeter and the building dates back to the 18th century. Boutique hotel operator aBode has brought its usual eye for sophisticated design to play with 53 rooms that all feature hand-crafted Vi-Spring beds, monsoon showers and luxury bespoke toiletries. Many of the rooms enjoy enviable views to the magnificent cathedral where events, tours and recitals take place in addition to the usual acts of worship. 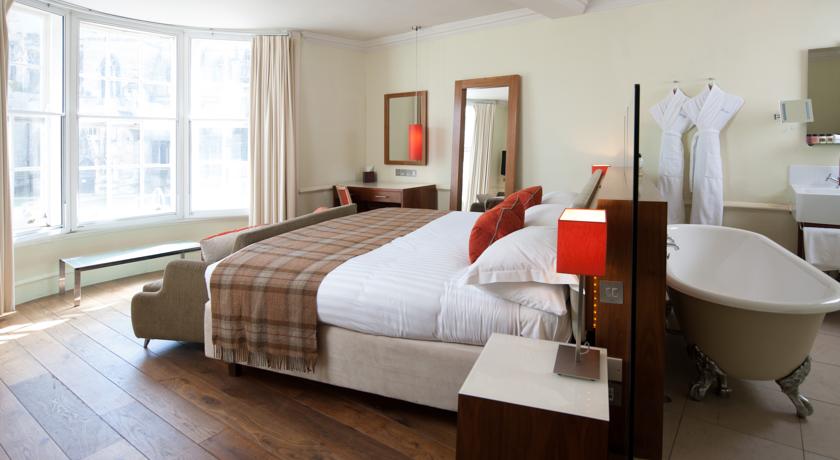 Many of the rooms at aBode Exeter have views of the cathedral.

Also close to the Cathedral Quarter is Southernhay House (****) – a beautiful Georgian townhouse that once belonged to Major General William Kirkpatrick of the East Indian Company. All of the ten spacious guest rooms in this Grade II listed property are beautifully and elegantly furnished, providing attractive views from the sash windows.

The Luxury Double rooms boast very large bathrooms and roll top bath tubs. A delicious breakfast is served in the Club Room, with a Full English, classic omelette or pancakes with streak bacon and maple syrup among the options as well as a range of pastries and yoghurts to help yourself to. 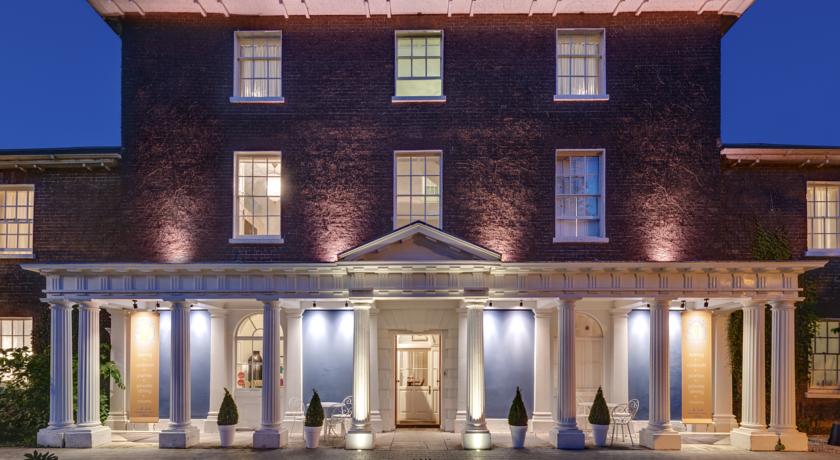 Ten minutes’ walk from Exeter High Street in a charming tree lined square is the Queen’s Court Hotel (***). The building itself is a townhouse which dates back to the end of the Georgian period and the beginning of the Victorian era. Period features are in evidence throughout this 19 bedroom hotel which also boasts a restaurant which has received 2 AA Rosettes. The three star guestrooms benefit from clean lines and natural tones, making this a relaxing place in which to stay in Exeter.

For the high quality design aesthetics of a boutique hotel but the extra space and privacy of your own apartment, Silversprings aparthotel is well worth considering.

These attractive serviced apartments offer well proportioned self-catering properties with fully equipped kitchens, sofas you can sink in to and they all have king or super king size beds. The one and two bedroom apartments in Richmond Road, just a few minutes’ from the city centre, can sleep between 2-5 adults. Free wifi and free parking is available. 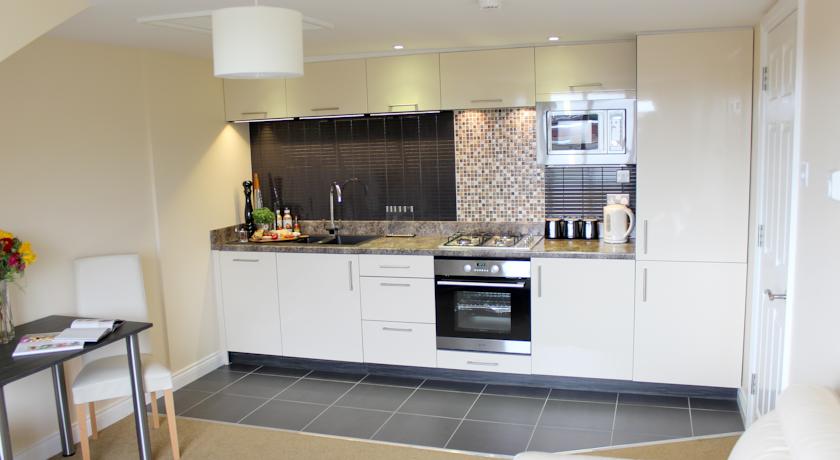 Contemporary fitted kitchen at one of the Silversprings apartments in Exeter

The Old Vicarage Bed and Breakfast

The Old Vicarage is a beautiful regency property in Kenton near Exeter is, as the name suggests, a former vicarage in the shadows of the parish’s red sandstone church in this charming village. Owners Bob and Jane have created a luxurious B&B with two delightful bedrooms.

One room has a King size bed and the other can be a King or twin on request. The rooms exude a quiet elegance with tasteful furniture which is in keeping with the lovely house, and the village itself. The tasty breakfast is homemade using, where possible, locally sourced ingredients. 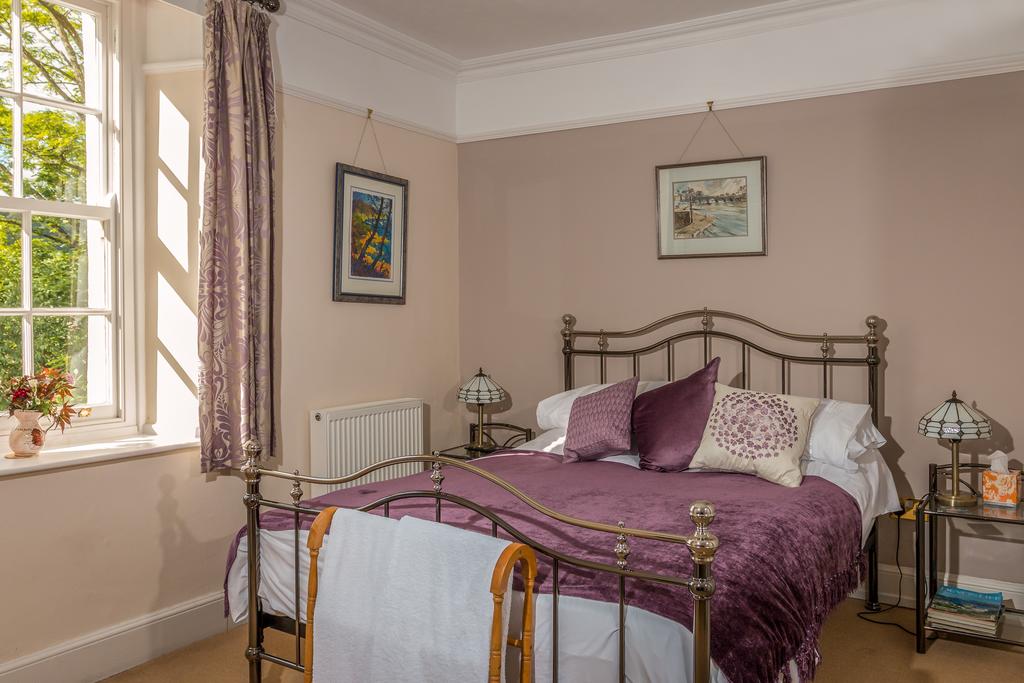