There’s plenty to swoon over in the latest adaptation of Poldark, not least its breathtaking natural backdrop. Cornwall, Poldark country, has been enchanting visitors for many centuries, so why not explore its rugged beauty for yourself? Along with its world famous landscapes, it’s home to numerous attractions – from the Eden Project to Tate St Ives – as well as first class foodie experiences, and with the quality of accommodation that adds up to an unforgettable trip. Cornwall’s boutique hotels marry the timeless appeal of their awe-inspiring setting with twenty-first century style.

Hotels mentioned in this article:

That combination of the best of the old and the new is found in Pebble House (pictured top). Situated in Mevagissey, a working fishing village dating back to the fourteenth century, Pebble House offers a haven of calm and comfort (especially as all beds are king or super king sized) for today’s traveller. This adults only boutique hotel describes itself as “THE house with THE views”, and has floor to ceiling glass windows in four of the rooms to maximise the stunning vistas over Chapel Point and the Eddystone Lighthouse. A highlight of any break would be enjoying Pebble House’s award-winning breakfast, lovingly created from local and handmade produce, on their terrace overlooking the sea.
Prices from £216 per night – book now

If your idea of Cornwall conjures up historic images of smugglers and secrecy, you can’t get much more atmospheric than The Lugger. It’s an old smugglers’ inn, dating back to the 17th century and is nestled amidst the steep rocks at Portloe, right at the water’s edge. Savour a meal in their restaurant overlooking the harbour, or hear the waves pounding on the rocks outside as you enjoy a beauty treatment in the spa. The 22 rooms combine crisp linen and Portuguese woods for a contemporary but cosy feel. And when better to hunker down in one of the rooms than on a storm-watching weekend? That’s just one of the special packages on offer through the hotel.
Prices from £109 per night – book now 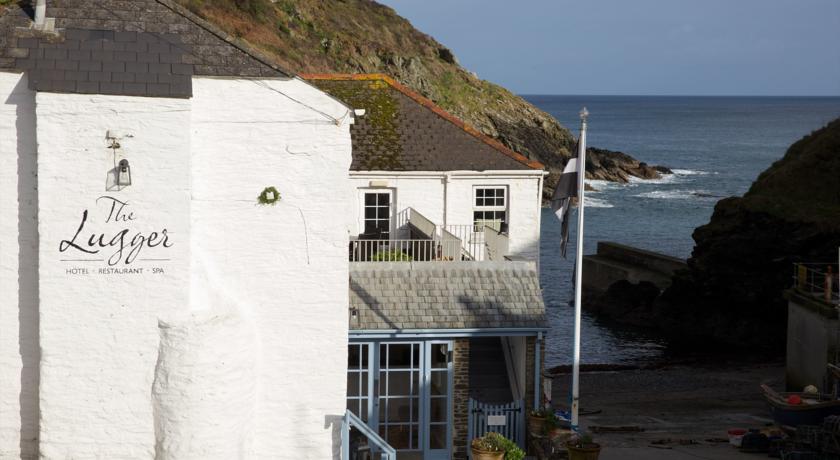 The atmospheric Lugger at Portloe.

Another treat that’s just for the grown-ups. Mawgan Porth’s The Scarlet (****) is a hotel custom made for unwinding, from taking your time over its great, local menu, to being pampered in the spa. Sit back and enjoy its contemporary styling while – in keeping with The Scarlet’s eco credentials – never being far from nature. Features include a natural reed pool, and a meadow leading from the spa down to the coastal path.

Each of the 37 gorgeous bedrooms also has their own outdoor space, which can be enjoyed in private – the “unique rooms”, for example, feature a staircase that leads up to a rooftop sitting room. Let your worries slip away in a pod in the deep relaxation room, or allow yourself to daydream while enjoying one of the log-fired cliff top hot tubs. Most likely you’ll be dreaming about coming back!
Prices from £240 per night – book now 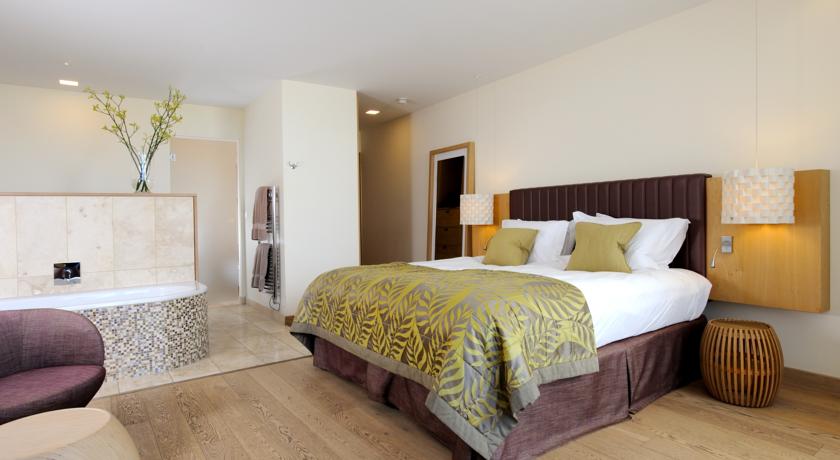 On the Roseland Peninsula, just a mile from the pretty and picturesque village of Portscatho, is the beautiful Driftwood Hotel. Driftwood offers 15 individually designed bedrooms, with a marine theme running throughout them all. Look out for relaxing, tasteful hues, and soft furnishings which allude to the hotel’s relationship with the sea, just a stone’s throw away. In fact, nearly all of the rooms have views of the sea to marvel at. Driftwood also boasts its own Michelin star restaurant run by head chef Chris Eden.
Prices from £215 per night – book now

With marine-inspired decor, nearly all of the rooms at Driftwood have sea views.